Minutes of the meeting held on the 31 October 2020 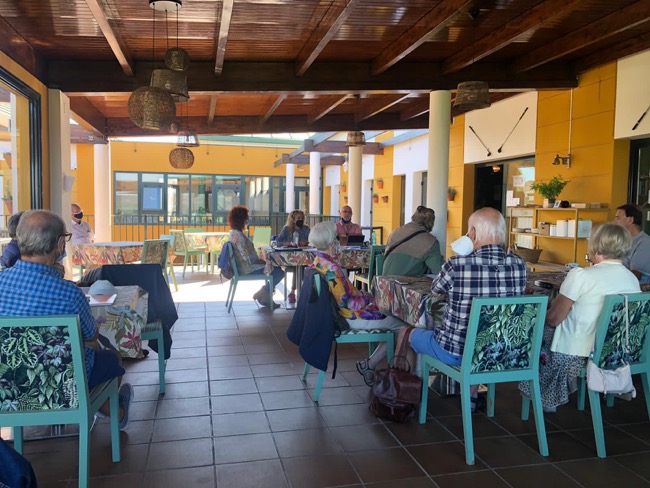 At the premises of the Valle Guadiana Golf Club, at 11:00 of the 31 October 2020, the Annual General Meting of the CERA takes place on the second call,.

LIST OF ATTENDANTS AND CONSTITUTION OF THE GENERAL MEETING

Such List of Attendants, duly signed by every attendant as well as by the President and the Secretary, is attached to these minutes as an integral part of the same.

Given the limits of capacity stablished due to Covid19, attendance by proxy has been promoted overruling the limit of proxies per member.

Mr. Paul Kelly, the CERA Vice President, will do the English version of the meeting in order that all the members can have knowledge of the development of the Meeting.

The President declares the Meeting legally constituted and addreess the attendees as follows:

Good morning everyone, thank you for joining us for the 2020 annual general meeting of the Costa Esuri residents association that due to the Covid 19 could not be held before.
.
I would like to start by thanking the Golf Club and in particular the Thebussem manager, for letting us use the terrace.

To make this meeting shorter, previous to this Meeting we have sent all the CERA members the minutes of last year’s AGM, the accounts for 2019 and the Proposals of Resolutions.

However,, we will deal with essentials and any matter you are interested in can be commented on under Any Other Business.

The items on the Agenda for this meeting, submitted for your approval are as follows:

2.- Approval of the management of theCommittee members during 2019.

4.- Request for an independent audit of the Accounts of the Costa Esuri Urban Conservation Entity corresponding to fiscal year 2019.

The attendants declare to have read these Minutes and that there is no need to read them here. Submitted to vote, they are approved by unanimity.

2. Approval of the Committee’s management during 2018.

The lack of social premises, as well as the closure of the Golf Club for most of 2019 has prevented us from having much presence among the residents. As a result, both the number of members and the collection of fees have slowed down compared to previous years.
We have spent a lot of time providing information to residents via email, website, and Facebook.
Numerous communications and meetings with the City Council for various matters, especially the bus service, which at some point will have to bear fruit.
Interviews in the media to support our demands and also to publicise activities.
We organised the Summer Fiesta and the Autumn Fiesta, as well as the Halloween party in Las Colinas.

We were present at the Offering to Virgen de las Angustias. In Ayamonte

The committee currently comprises of seven people, we need to expand the number of members of the committee , to which we invite any member who wishes to join to contact us.

Submitted to vote, the Committee’s management is approved by unanimity.

Submitted to vote, the CERA accounts for 2019 are approved by unanimity.

4. Request for an independent audit of the EUC’s last four fiscal years or, in any case those for 2019.

The Managing Board of the Entidad Urbanística de Costa Esuri (Urban Development Entity) has not convened this year’s General Assembly, as it should have done not withstanding the regulations issued following the Covid19.

But they have approved the 2019 Annual Accounts at their meeting on March 4, 2020, which are published on the Entity’s website.

A cursory analysis of these accounts, without needing to have accouting expertise, gives us the conclusions that motivate this proposal:

It has to be said that although the published documentation does not say that the amounts are given in Euros, we will assume that this is the case.

This figure is the same each year because it is the amount billed (100% of the owners), but not the amount collected, which is the relevant figure to know the real income of the Entity, and which is not provided in the Accounts.

Included as income from the Town Hall is 2.564.572,18, which is the accumulated income since 2017. To know what the Town Hall entered in 2019 we have to make an operation subtracting from this figure the one that appeared in the accounts of 2018 (1,764,071.20€). The result is that the Town Hall entered into the EUC account in 2019 the amount of 800,500.98. This amount is assumed to be the total collected, both in the voluntary period and by means of enforcement procedures.

As we have been informed by different sources of the EUC Council, in July 2019 around €520,000 of the outstanding debt of the golf course was collected.

If we subtract from the amount paid by the City Council to the EUC of 800,500.98 the 520.00 of the debt collected from the golf course and 49,331.12 of the surcharges and interest of the amount collected by the executive way, it gives us a result of 231,169,86 euros for the collections of fees during the year 2019; an amount less than 30% of the bills to be collected in the year in voluntary period.

As is generally known, Gestión Tributaria charges a percentage for the management of fees, which varies according to if the collection is done in voluntary, pressing or executive period. The accounts show revenue of 35,099.30 for default interest and 14,231.82 for executive interest, but expenditure is given as 57,661.64.

The information provided is very deficient and the figures provided include some that do not agree.

Of which 518,622.85 correspond to the old debt of the maintenance company.

According to the EUC’s Board minutes of its meeting of 4 March 2020, this payment has paid “in full” the old debt with Comfortervi to 2016, although the default interest on that debt (?) will be presented in the 2020 budgets, but there is no provision in these budgets for this.

€57,661.64 has been paid to Gestión Tributaria for collection in the voluntary period. In 2018 this figure was 50,598.64. It does not follow from the accounts that voluntary collection has increased.

There is the question of compensation to the Governing Council, which is not a large amount, but which is not authorized by the Statutes and which are not budgeted, when they budget lower amounts.

III) The Initial Balance (actually negative Own Funds, although in the Accounts they appear as positive), has increased to December 31, 2019 in 458.023,24, which is very serious because it means that the debtors have increased over the previous year. Contrary to what the Council says in the minutes of its meeting on 4 March that “revenue is still rising”.

The owners have the right to know how much has been collected during the fiscal year, how much has been collected in voluntary period, how much in executive procedure and which debtors have paid their debts.
We are entitled to a Balance Sheet and a Profit and Loss Account drawn up with the information required to be comprehensible to EUC members., containing 2018 data that allows comparison with the information of the previous year and the evolution of the Entity.

This is an obligation established in both the Entity’s Statutes and the General Accounting Plan, and which the Board of Directors fails to comply with year after year.

The Managing Board of the EUC acts with opacity towards the owners, which gives a legitimate basis for speculation. There are many Urban Development Entities that, without the prompting of their members, provide audits of their accounts. Not so the EUC of Costa Esuri.

It is based on the doubts that the Accounts of the EUC given to us each year and in this case those for 2019, that we submit to the decision of the Assembly the following proposal:

We Request from the Ayamonte City Council, in its capacity as Guardianship Body of the Urbanistic Entity of Conservation of Costa Esuri, to order an independent audit of the Annual Accounts of said Entity for the four fiscal years or else for Fiscal Year 2019, delegating the President of the Costa Esuri Residents Association La Luz to carry out, on behalf and representation of the 670 members of the same, all the necessary procedures to process the aforementioned request.

A long deiberation follows. Among others, the issue is raised that the Town Hall does not admit our request. It is explained that there are other ways, but the Committee will do is best in order that the Town Hall complies with its function of control. It’s also explained that to ask for an audit is nothing special, that as a matter of fact it should be the EUC’s Managing Board that would provide it without any request, as it is frequent in other EUC’s.

Submitted to vote, the proposal is approved by unanimity.

The Vice President has been asked by several members to raise the issue of postal deliveries to various urbanisations on Costa Esuri. It appears that mail is not being delivered to houses on La Jara even though they can be accessed on foot. A member present states that she lives on Lomas on one of the inner roads and regularly recieves mail at her house, this should be the norm for all accessable urbanisations.
The committee will write to Correos in Ayamonte to alert them to these complaints, and to request reassurances that this will be addressed.

There is a request for speed bumps to be set on Calle José de Espronceda, which because of its topography is usually used at a higher speeds than allowed. This is especially prevelant when travelling towards Calle Miguel De Unamuno.
There is another request that speed bumps be lowered on Calle Juan Pablo II as many members regard them as being too severe.
These issues will be discussed at the next meeting with the town hall.

The committee repeats its call for members of the association who can contribute ideas and knowledge, and perhaps also different methods, to contribute to the Community. The committee is always open to new members and, even, to its complete renewal, if that can produce better results both in coexistence and in institutional management.

With no further business the President thanks everybody for their attendance.

THE PRESIDENT THE SECRETARY