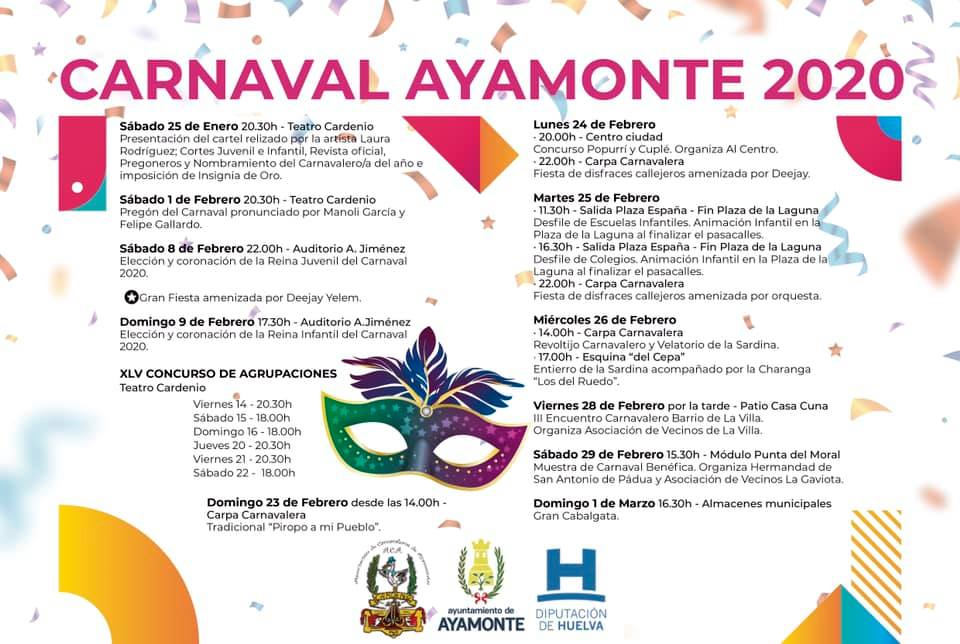 The City Council of Ayamonte and the Carnival Association have published the programme of the Ayamontin Joy Festival, which will officially begin on Saturday, 25 January, with the presentation of the poster announcing the Ayamontino Carnival, created by local artist Laura Rodríguez.

At the same time, the children and youth courts, the preachers and the official carnival magazine will also be presented  at the Cardenio Theatre. The name of the Carnival of the Year will also be announced, which will be awarded the gold badge of Carnival.

The activity will continue on the first day of February with the Phagon, which will be pronounced by a couple of great carnavars: Manoli García and Felipe Gallardo.

The next weekend, in the Amader Auditorium Jiménez, the choice and coronation of the Youth Queen will be made on the Saturday. Next, on 14, 15, 16, 20, 21 and 22 February, the Carnival will host the XLV group of contestants, to continue on Sunday, 23 February with the celebration of the traditional “PiROPO to my village”, in the Carnivalera tent.

On Monday, 24 February, at 20:00h, the Anturnal Association will carry out the Poperís and Cupres Contest and, from 22:00h, the Carnivale Carpa will house a large costume in the first day of “streets”.

Tuesday, as usual, it will be started by the traditional parades of day care and children’s schools, in the morning and in the afternoon, which in both cases will conclude with animation activities for the children in the central Plaza de la Laguna.

In the evening, a great costume party will be held in the tent. On Ash Wednesday, which will have a festive character, the carnivale revolthy will take place in the tent and, as a novelty, the sailing of the sardine.

On the festive day of Friday, 28 February, Day of Andalusia, in the Patio de la Casa Cuna, and by the Association of Neighbours, will be held, from 14:00h, the III Carnival Meeting Barrio de Villa, while the next day, Saturday, in the socio-cultural module of Punta del Moral, the Brotherhood of San Antonio de Padua and the Neighbourhood Association will celebrate a carnival show.

On Sunday, 1 March, the grand cavalcade, which will depart from the municipal warehouses, and the delivery of prizes and piñatas,  at the Cardenio Theatre, will put the finishing touches to the Ayamontinas Festival of Joy.