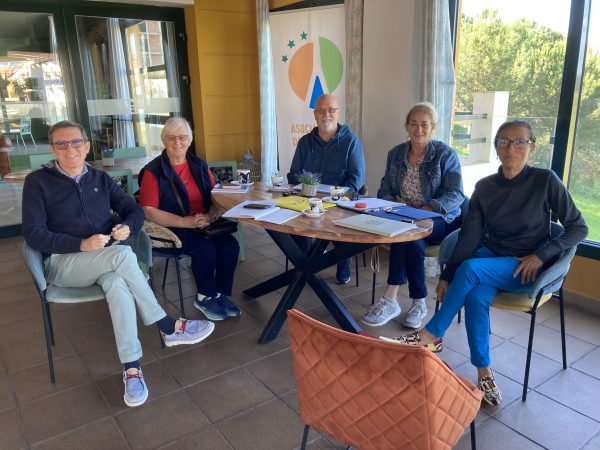 Summary of  the discussions and agreements adopted at the meeting of the Committee of the ASOCIACION DE VECINOS DE COSTA ESURI held on November 19, 2022.

Meeting with the Environmental Department of the City Council

On 17 November, a meeting was held between our President and Mr Cuevas (from CERA) and Mr Maestre and Ms Romero (from the Environment Dept.) to discuss organising a garbage collection drive in Costa Esuri. It was agreed that this activity will be included in the LIBERA Project, which includes cleaning of the beaches and countryside. The Town Hall will provide kits, including gloves, bags, a small tent to house a weighing machine and a truck to take what has been collected to the collection point. It will also be responsible for promoting this collection drive in order to achieve a significant participation, calling on groups such as Scouts, Red Cross, Associations, etc., as well as the preparation of a poster. When the date is set, we will publicise it adequately so that the participation of the residents of Costa Esuri is maximised.

We discussed the issue of a civic centre for Costa Esuri, which we believe is an absolute necessity and something that CERA has been requesting for years. We were informed that there are EU funds (Next Generation Project), received by the Government of Spain to be managed by the municipalities, for which the construction of a civic centre could be eligible. This requires that the appropriate areas of the Town Hall study this possibility. Mr Cuevas will contact Mr Cazorla, Councilman of Citizen Participation, to request his collaboration.

It was requested that the Costa Esuri Map be returned to its original position on the advertising board so it is visible when entering Costa Esuri. At the moment, it is only visible on leaving.

The subject of debris and damage to the roads and walkways that various major and minor works leave all over the Urbanisation was commented on. Although this subject is perfectly regulated, the necessary vigilance is lacking on the part of the Town Hall, thus resulting in the requirements of the law not being fulfilled.

In relation to the numerous trees that have died or are in poor condition, it is recommended that they be reported through the Linea Verde app.

A meeting was requested with Mr Víctor Hugo Rodríguez and the Technical Secretary of the Town Hall to discuss the Statutes of the EUC. To this end, an email will be sent again, insisting on the need to solve the numerous gaps, inconsistencies and inadequacies in the statutes that CERA considers should be corrected for the benefit of the best management of the EUC. (see below for more detail)

Finally, the President reminds all owners and residents of the importance of becoming a member of CERA and also of collaborating with the Committee as much as possible.

Following what was agreed at our October meeting, on 14 October, we have requested the Town Council to call an Extraordinary General Meeting to fill vacancies on the Board, as required by the Bylaws, as well as to approve the 2021 Accounts, which were not approved at the March General Meeting, and the implementation of the Accounts audit. This same request has subsequently been forwarded to the Town Council as the guardianship body.

In this context, it is proposed and unanimously agreed to request the Governing Council of the EUC and the City Council to eliminate point 3 of Article 28 of the Statutes (“The members of the Governing Council shall designate the positions of Vice President, Treasurer and Secretary”), as it is contradictory with point 1 of the same Article 28 and with the provisions of Articles 33, 34 and 35, since they all attribute this competence to the EUC.

On another matter, given the lack of response from the Town Council to our request for information regarding the Tax Management Service and the collection of the EUC quotas, this request has now been submitted to the Transparency Council.

As we have been saying, with all these actions we are trying to ensure that the Governing Council of the EUC complies with the provisions of the Bylaws.

The Agreement entered into between the Town Council and Martinsa-Fadesa on 1 August, 2014 has been published on the EUC website. Given that this agreement is no longer in force, its reading makes it very clear that it is the Town Council who has the responsibility to finish the urbanisation works that the developer left pending and for which it granted the necessary guarantees. The Town Hall must comply with its obligations, as CERA has been requesting, and we must all claim this, by any means possible.

A new request has been sent to the Town Council to make public the responsibilities of the Town Council and the EUC in everything that affects public property in Costa Esuri. This has been previously requested and it was promised to us at the meeting held on 5 July, 2022.

The next Board meeting is scheduled to be held on January 14, 2023.

The complete minutes will be made available to any active member of the Association upon request.

The ASOCIACION DE VECINOS DE COSTA ESURI needs more neighbors to join. We need to be strong to demand that the City Council and the EUC fulfill their obligations and respect our rights. Please join and encourage your friends to join.

If you fell you have expertise or experience that would be helpful to the Association and want to contribute to improving our Community, you are welcome to join the committee.