SUMMARY OF THE MEETING HELD BY D. ALBERTO FERNÁNDEZ (POPULAR PARTY) WITH 19 RESIDENTS OF COSTA ESURI IN THE GOLF CAR PARK ON 4 JULY 2021. 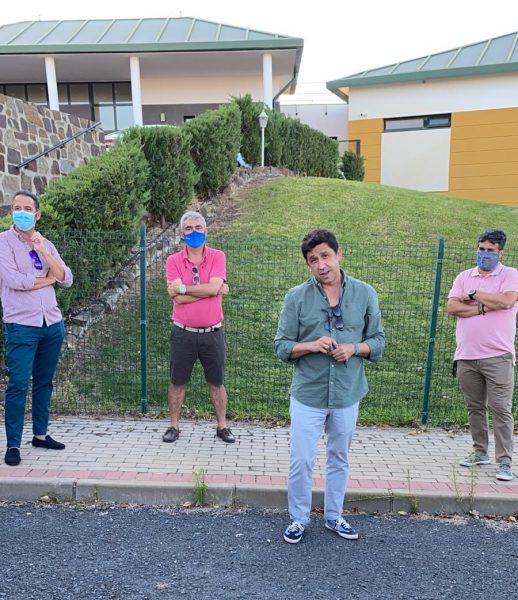 Mr. Fernandez said the purpose of the visit was to talk about the execution of M-F’s guarantees and the reception of the EUC Costa Esuri, in which he stated:The original project of Costa Esuri, that we may never see, had projected about 7,000 homes, with an average occupancy of 2.5 people this would have given a population of about 17,000 people.

Costa Esuri would be larger than 94% of the municipalities of Huelva. That’s why we have to make a new project, to issue a tender, assign the contract and thereafter receive the urbanisation.

The legal opinion I gave you in a prior meeting required that 50% of the dwellings be finished, complete with a certificate of habitability.

That condition is already met. At the moment that everything included in the guarantees, green areas, roads, treatment plant, is executed, if the PP governs, we will take to the Plenary the reception, then the EUC can be dissolved, and from that moment maintenance by the City Council will begin. That is so by law. Even if we do not govern, with our ten votes, and one more, it can be  passed.

It took us the first two years of the PP’s government to unblock the guarantees with the Banco de España, who needed to  authorise it. One of them was lost for life (the responsibility is of the Bank of Spain because the guarantee was badly constituted). We rescued the other €4,270,000.

This money was in a City Council account and can only be used to complete the Costa Esuri project: Roads, landscaped areas and sewage treatment plant. The projects of the three blocks were done by us.

The first block was tendered, assigned and received. We left bidding and executing the first block, for an amount of 900,000€. It is not about making it perfect, or if it was well finished, it is about doing it so that the Town Hall can receive.

If we bid, assign and leave the work finished, why haven’t the new administration received?

Q: Are the roads received?

A. YES. Maybe I’m wrong, I’m talking as I remember. It was bid, assigned and executed. The work is done to receive, therefore it must be received. We will ask for it in writing. In the next plenary session we will ask for the minutes of reception and when we have them we will give them to you.

Q: Large-tonnage trucks are coming, damaging the streets and saying it is not the responsibility of the City Council.

Q: When you were in City Hall the Residents Association brought this to your attention and you did nothing.

A: All building licenses require a warranty for damage to be repaired, if not it’s not returned. Though it is never done.

Sewage, channelling the water to that sewage treatment plant is subsurface piping, which needs to be fixed. The treatment plant you have here is small, serving what’s here right now, but it wouldn’t service the 7,000 units that were the complete development. But that won’t be necessary, so we need to review the project.

Q: Does the City Council have the resources to take over the maintenance of Costa Esuri?

A: All municipalities receive subsidies for participation in the state taxes (PIE) and in the taxes of the junta of Andalucia. They are the main income of all the Town Councils, about 4M.€ per year. Depending on the number of inhabitants and also on the population nuclei and the distance to the main nucleus. But as Costa Esuri is not received, it does not count. By the time you are received, the City Council will receive more money. That is the political impulse, which only the government of Ayamonte can do.

Q: The City Council sent a person with an ice cube and a broom three years ago.

A: We had a cleaning contract, Costa Esuri was included. There was a cleaning service with sweeping machines, two street sweepers with motorcycles, street sweepers on foot, … The contract was allowed to expire. They removed Costa Esuri from that contract. It cost almost €200,000 more than we had in the tender.

Q: Costa Esuri does not exist for Ayamonte:

A: Not so. The golf course was closed and I talked to the owner of Isla Canela and I said, buy it please. Because then Costa Esuri does die. I have brought about 15 hotel investors and also for the mall. Things are done. It is very difficult as long as the houses are not built. The pharmacy was ordered by me.

A: I don’t know, you can ask. If you want, I will ask and I will give it to you. The IBI is paid by all the owners, also Sareb, Bankia, Santander (Altamira)….

Q: The EUC does not keep the owners informed.

A: I forced the creation of an EUC website. I also instructed the council representative not to vote unless there was some obvious error. If it was necessary because some controversial decisions were taken, the Secretary of the City Council was asked for a legal opinion. The City Council must ensure that everything is correct. If it is not, it must be required to exercise guardianship.