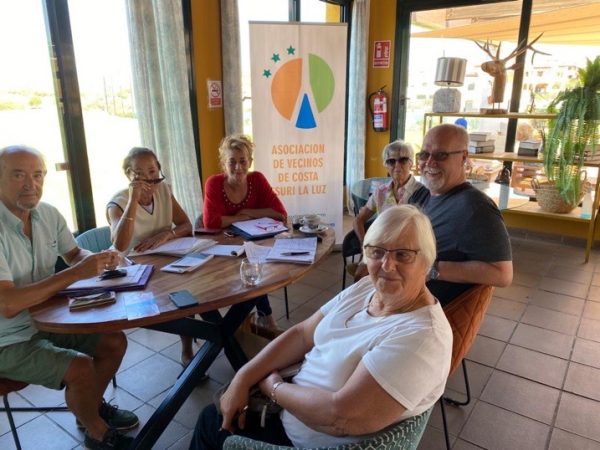 Summary of matters discussed at the Committee  Meeting on 8 October, 2022.

SUMMARY OF THE PRESIDENT’S REPORT

The President recommends that we insist on the cleaning of ditches and bushes on the road from the A-49 to Costa Esuri, which is the responsibility of the Ayamonte City Council. We will send a new request by email to the Council.

Throughout December, we will organise, with the help of the Town Hall and members of the Committee and the Residents’ Association who are willing to do so, a rubbish collection in Costa Esuri.

The Saturday shifts will be resumed in front of the Lomas de Esuri Shopping Centre, for two hours, which can range from 11:00 am to 2:00 pm, depending on the availability of those who do the shifts.

The Tourism Awards Gala held recently at the Cardenio Theatre was attended by members of the Committee. We will study the possibility that the Residents’ Association can apply for these awards in the future, to further promote Costa Esuri as a tourist area.

We have requested two meetings with the Town Hall, one to discuss matters of the Residents’ Association, in line with meetings that we have been holding in the past, and another jointly with the Town Hall (legal services), the EUC Council and the Residents’ Association to reconsider the Statutes of the EUC, which, as we have been commenting on previously, contain contradictions and articles that are not appropriate to or adequate for the operation of the EUC, and that should be modified. This is vitally important for the correct functioning of the EUC of Costa Esuri.

Given the time elapsed without news, we will renew our request for these meetings with the Town Hall.

Finally, and especially in view of the recent resignation of a member, the members of the Committee are now very few and we need to fill the three vacancies existing today. The President comments on the difficulty we have in working for the Community, organising activities, attending meetings and developing projects. If there are more of us, we will be able to distribute tasks more equitably and improve our effectiveness. Therefore, the President invites  members of the Residents’ Association to actively participate in our work by putting themselves forward to fill these vacancies.

SUMMARY OF THE TREASURERS REPORT

Legal action
The treasurer reports that the total sum of donations for the legal action taken against the EUC and town hall, both by the go fund me page and direct payment into our bank account amounts to €2087,00.

We paid €42,54 commision to go fund me leaving a total of €2044,46 for the legal action. We would again like to thank everyone who donated.

Resignation of Board Member.

The committee accepts the resignation submitted by Ms. Annette Murray from her position as a member of the Board of Directors of the Neighbourhood Association sent by email dated October 7, 2022, for personal reasons. All the attendees are very grateful for Annette’s collaboration and her effort to participate in all our actions not only during the time she has held her position, but at all times as a member of the Association.

To request the EUC Council to call an Extraordinary Assembly.

Mr. Tapia recalls that at the General Assembly held on October 29, 2021, there was no Vice President and it was stated that a member had resigned. The EUC Bylaws require that an Extraordinary Assembly be held within the following three months to elect these positions. Not only has this not been done, but this item did not appear on the Agenda of the Ordinary General Assembly held on March 30, 2022.

Likewise, at the Assembly held on March 30, 2022, it was approved to audit the accounts of the EUC, and the Chairman of the Board stated that he would call an Extraordinary Assembly to approve the period of the audit and its cost. To date, more than six months later, not only has the Board done nothing in this regard, but the minutes of its meetings show very little willingness to do so.

On the other hand, at the aforementioned General Meeting of March 30, the Annual Accounts for the 2021 financial year were not approved, which in turn implies rejection of the Board’s management, which was not submitted for approval by the owners. Business practices require that new accounts be presented, rectified as appropriate, and in good practice, this is what the EUC Board should do.

Therefore, Mr. Tapia proposes, and it is unanimously accepted, to present a letter to the Board, with a copy to the Trusteeship Body, requesting them to hold a General Assembly to deal with these issues as soon as possible.

Independently of the above, although the thread of the operation of the EUC, Mr. Tapia informs of the resolution received from the Council of Transparency in order that the Council publishes Annex I of the Statutes in which the percentages of ownership of all the properties in Costa Esuri appear.

In line with all this, the request made by the Association to the Council on December 13 for information on any agreement, arrangement or contract whereby our dues are currently to be managed by the Tax Agency is commented, and it is agreed that, if we do not receive this information, we will also go to the Transparency Council at the appropriate time.

The purpose of all the above actions is that the EUC Board understands that it must comply with the Bylaws, that it is accountable for its management and that it acts transparently and for the benefit of the owners.

For years we have been asking the Town Hall for a civic center for Costa Esuri, as there are others in the municipality.

We need a place where we can hold meetings, where mothers can visit with their children when they need it and have no other help, where the elderly can meet and chat. Where we can give language classes, computer classes, painting classes. And many other activities that today cannot be done in Costa Esuri but are necessary for the daily life of a community.

Since the Town Hall has been turning a deaf ear to this request, which is legitimate, the committee is studying the possibility of taking the initiative to achieve this objective. We will talk to the political groups to gauge their attitude about the possibilities and requirements for implementing it, plot, subsidies, licenses etc. We will undertake actions to obtain donations; we will talk to all the agentswho wish to collaborate, such as architects, builders, painters, … We will request the collaboration of all the neighbours. We will form a commission for this purpose, chaired by a member of the Board of Directors, to organise and coordinate all actions.

Achieving a Civic Centre for Costa Esuri will be a priority objective from now on.

Recently, a person has had a hard fall in Miguel de Unamuno street due to a sidewalk in bad condition. We remind everyone that the EUC is responsible and it is the Council who should be claimed for damages, who have insurance for these things.

Just as we must also claim to the Council for trees whose roots prevent us from walking on the sidewalks or threaten to lift the walls of our homes.

We will send a new request to the Town Hall to make public the responsibilities of the Town Hall and the EUC in everything that affects public property in Costa Esuri, which we have already presented previously and which they promised to give us at the meeting held on July 5, 2022.

Again we have received complaints about drivers who do not respect the speed limit, especially in front of the Lomas de Esuri Shopping Centre, so we will again ask the City Council for speed bumps or other means to force them to respect the rules.

The lack of action by the Town Hall in relation to the fence of the shopping center at the entrance of Costa Esuri is again commented on.

The ASOCIACION DE VECINOS DE COSTA ESURI needs more neighbors to join. We need to be strong to demand that the City Council and the EUC fulfill their obligations and respect our rights. Please join and encourage your friends to join.

And if you can bring your expertise, your experience, and want to contribute to improving our Community, you are welcome to join the Board of Directors.