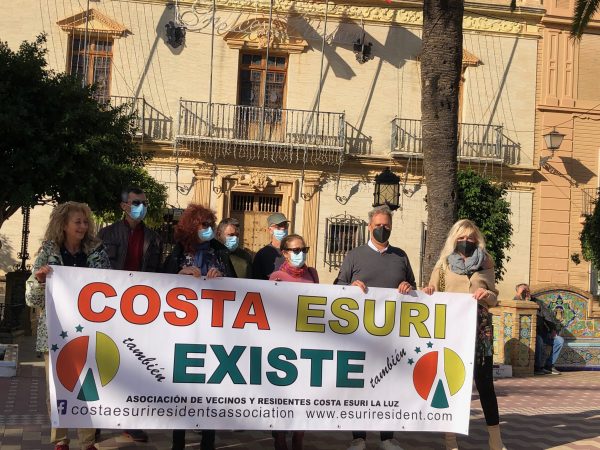 We are demonstrating under the slogan COSTA ESURI EXISTE to remind the Ayamonte City Council that the owners of Costa Esuri are citizens with duties, but also with rights.

That the residents of Costa Esuri are tired of contributing a lot of money to the coffers of the City Council, without it reversing anything in our Urbanization or even addressing other claims that do not cost money.

Because we are an Urbanization with more than 3,000 regular residents and we do not have a bus service to take us to and from town. It is the minimum that can be asked, to spend some of what we pay on a bus service, to be able to go to the doctor, or to go shopping, to the beach or to have a coffee with friends.

Because they do not listen to our claims that are not of an economic nature:

Because rubble is being thrown everywhere, in private plots, in green areas, both minor and major works resulting from excavations for houses, without anyone taking action.

Because walls are being raised in new ten-foot homes, without anyone taking action.

Because the construction trucks are leaving dirt and pieces of cement on our streets without anyone taking action.

Because Urban Planning Discipline does not appear for Costa Esuri.

Because for more than six years the City Council has in its possession 4.2 million euros that are for Costa Esuri, and we do not know what they do with the money, because in Costa Esuri they do not use it.

Because the repairs that have been made on the streets have been half done and no one has controlled or controls how they were carried out.

Because it does not protect the management of the Urban Conservation Entity, as is its obligation, and that the City Council itself imposed on us. Our palm trees and gardens, the cleaning of our streets, we pay for it.

Because we do not have a social center or sports areas.

Because we ask them to inform us of the amount that is collected in Costa Esuri only by IBI, and they do not inform us.

Because we ask for a zebra crossing in front of a shopping center and we are not served.